Tweet this article (and video)
You may have heard of the EU 2020 targets. But for those that haven't they are the five ambitious objectives the 27 EU member states have set themselves.

In this article I want to look at one of those objectives, specifically the one that deals with climate change and energy. Something that is is a fairly contentious subject in Wales. Just mention wind farms to anyone and see how they react.

Climate change / energy
As we have previously looked into, Wales is not a member state it is a region of the UK. So the climate change objectives have to be met by the UK as a whole. Luckily for the UK the targets aren't actually 20, 20, 20. They are 16%, 15% and N/A.

That's right, the UK doesn't feel the need to improve energy efficiency by 2020. Just as it doesn't have to do much else to satisfy the other objections. In fact the UK is the only one of the 27 member states that does has not have to meet any targets for employment, innovation or education. As for the child poverty target, we'll have to see what a decade or so of Labour apathy and then a further decade of Tory cuts does for that one.

So let's focus on renewables in the UK then and see if we can at least reach that 20% 15% figure. This site here shows a map of the UK and conveniently it's centred on Wales (pictured below), on the map you can see where renewables such as wind turbines are. On the map itself you can zoom in, highlight the items and see more info. But one thing struck me as soon as I saw it. And the more eagle eyed regular readers may have spotted it too. 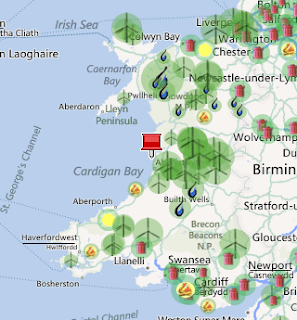 Give up? They all look remarkably close to sites listed as assets of The Crown Estates. 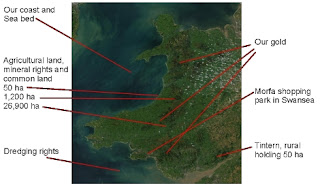 Using the interactive map I was able to create this next graphic which shows all the current, proposed and work in progress in land wind farms in the UK. Now I don't know about you but one area of the UK looks a little “under represented” on the old turbine front. 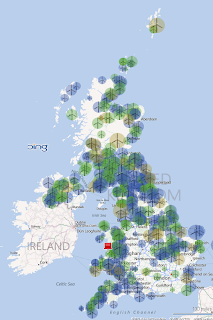 So let's get some data and then we can get down and dirty and see what we come up with. The Department for Energy and Climate Change is our first port of call. After all it's the official site on such matters. The stats they have published are from 2010. But it's not like these things sprout up over night. The full data can be found here but numbers alone are boring, what really gets people excited is fancy graphs and pie charts.

The following graph shows how much electricity was generated in 2010 by renewables by each region. The figures are in GWh. 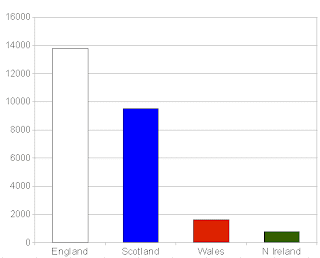 The next graphic will show the size of each region of the UK as a percentage. 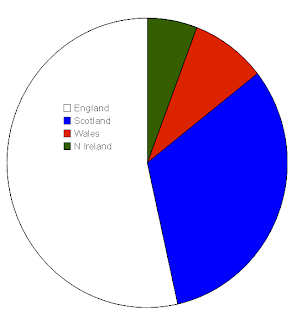 The next graphic will show the population of each region of the UK as a percentage. 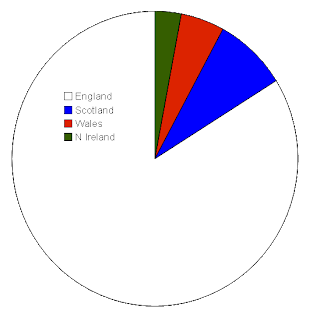 Now here's what we're going to do now, we're going to take that data from the first graph (renewable production) and divide it by the populations of each country. 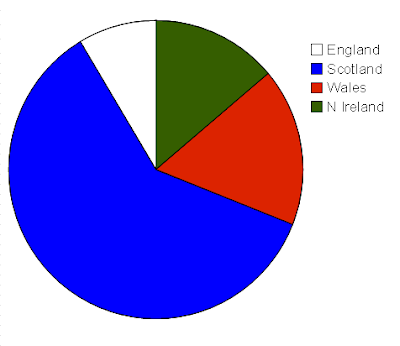 So let's look at how we're doing and whether this 15% is actually achievable. According to the Association of Energy Providers, the UK produced 383,791 Gwh of electricity in 2010.

It also shows a breakdown of how that electricity is generated, with renewables coming it at 7%. So that's under half what the UK has signed up for. This next graphic depicts the current percentage of renewables in the UK in light green. Non renewables are in red and brown The UK needs another 8% and this 8% which is currently being met through non renewable methods is depicted in brown. 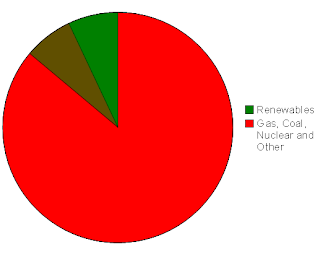 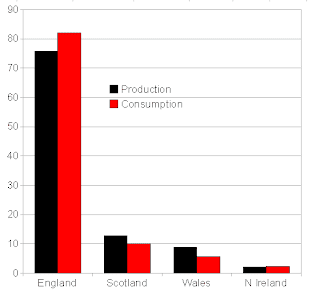 Now using the same data from 2009 (link above) we can also look at the percentage of renewables produced by each region. For added effect I've added it to the graph before in green. 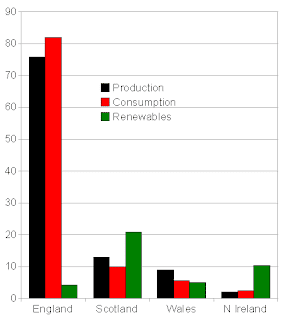 You've seen the target we have set ourselves and to be fair it isn't very high, in fact there are only 7 countries that have set themselves a lower target. And yet we've seen just how far short we are currently. We've also seen that Scotland, Wales and Northern Ireland are producing far more renewables per person than England is. Scotland in fact is generating over six times as much per person. And that both Wales and Scotland are producing more energy as a percentage of the UK total than they are consuming. Both Scotland and Northern Ireland produce more green energy as a percentage of UK total than they consume. Wales falls just short but that is because Wales is a net exporter of energy. If we only needed to produce enough for ourselves, or had a Welsh Government with the same powers (and same backbone) as Scotland this would not be the case.

It should be fairly obvious by now that the UK renewable energy strategy is to fill three of it's four regions with renewables whilst the fourth remains under represented. What's worse about this is that that last region is the one that is using far more than it is producing and relies on power generated in regions that do not require that power, which wouldn't be a bad thing if we were properly recompensed. But as we have seen with out water this is not the case. We need to ask ourselves what would happen if one of those regions were to become independent? What if that region was the shining example that provides the bulk of the UK's currently pathetic 7%*.

That would put the final nail in the coffin wouldn't it? Imagine if Scotland had an independence referendum coming up in say 2014. I am trying to find out what happens when we fail to achieve the 15% target. But just remember, the next time someone calls you a Nimby for not wanting a turbine on your hills just ask them why England is not pulling it's weight.

As always, here is a video to help share the message.