One thing I have been meaning to do for a while is mention facebook pages and this is an opportune moment to bring it up. A lot of blogs don't have them, presumably they don't understand them or how beneficial they could be. I'm going to show you some stats that I hope make people sit back and think.
When I first started this blog I created a twitter account and facebook page as a means of promoting it. It's come to the point where the blog almost feels slightly redundant. Like a third wheel on a two wheeled cliche. When someone likes your blog they can follow it via a blog reader or bookmark it or they will follow links from the link lists on their own or other blogs. But in order for them to come back to your blog they have to click through onto it. When someone follows you on twitter or likes your page on facebook they see your posts automatically, providing they are online around the time you post it. They don't have to do anything, it's like an advert in the middle of a TV show. Of course they can keep scrolling if they want to but maybe they'll like what they see and click through.

The following stats all concern the graphics I made for the Y Lolfa petition. At the time of writing the English version of the Amazon picture it was seen by around 4,000 people on facebook alone. That's the people who saw it originally plus the people who saw it as a result of the 64 people / pages who shared that picture.
That week (3rd-9th July) the cummulative total of views for posts on there was around 31,500. As opposed to around 1,000 on here. The most I've hit in one week is 120,000 although that was something rugby related after we beat England. But still, on any normal week I'll have 13,000+ people see my posts as a result of them liking the page or posts being shared through direct sharing, likes or comments (depending on privacy settings when you like or comment it shares via their page). It's worth pointing out that whoever likes the page as a result of seeing something that may not be political will go on to see the posts that are.

The Welsh language version I posted directly on a page that deals exclusively with Welsh Memes so I don't have an exact figure for the views but it was shared 84 times. So at a guess it's probably more than the 4,000 that saw the English version. 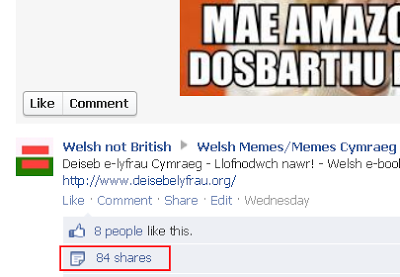 The majority of those were before the page itself shared them, it's a page frequented mainly by Welsh speakers. Some of those sharing had the pictures shared again, for example Plaid Torfaen shared the picture and that was shared a further 12 times.

I don't want people to think this is a post saying "ooh get me". This is nothing of the sort, this is me saying that facebook gives me the opportunity to have more people see my posts in a few hours than would visit my blog in an entire month. If that doesn't make people question why they do not already have a page on facebook then I don't think anything will. Just try it, see what happens and if you need any help with gadgets, integration, auto posting and what not then just ask.