January 2016 will mark the 150th anniversary of the composition of Hen Wlad Fy Nhadau by Evan and James James of Pontypridd. December 16th 2015 will be the centenary of Hen Wlad Fy Nhadau being used as Wales’ anthem at sporting events. For the first time ever the players and crowd sang an anthem before an international match. This would become a staple tradition of international sporting events across the world. But it all started in the old Arms Park because Wales wanted to mitigate the infamous haka used by New Zealand. Hen Wlad Fy Nhadau became our battle cry and we won the game 3-0. Now, it is time to make this battle cry the official Welsh national anthem.


I have posted the reason for creating this petition here and the Cymraeg version of this post is here. Again I've included the tweet from the official Senedd account so that if anyone wants to share it simply by retweeting but doesn't want to retweet my account then they can use this.

The important thing is that we all sign this so we can make our anthem official, just like our flag was made official and Cymraeg was made an official language. When the petition was published I made the decision to trickle it over time, at least a week. Posting it in some places on the first day, others on the next and so on. That way it guarantees it a steady stream of hits rather than a big hit and then nothing.

But an important thing to remember is that whilst I may have been the one to submit the petition in the first place it doesn't belong to me, it belongs to everyone in Wales who loves our country and our anthem. So please feel free to save any of the graphics and share the links via your own accounts.

That being said, it would appear that the people of Arfon have said "chill out, we got this". After almost 600 signatures on the petition, Arfon alone account for over 12%. 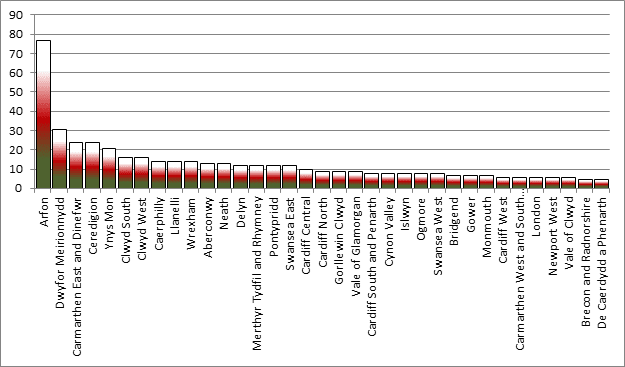 A couple of things to consider. As of the 598th signature (when the above graph was made) there were 123 separate entries for the area. Many of these are doublers, as an example in the above you can see Cardiff South and Penarth and De Caerdydd a Phenarth. Both the same place just one is written in English and one in Welsh, some will have a typo or be in all capitals which wouldn't have combined them. When the petition is finished I can go through these and combine them where applicable, it's a fairly quick process with a spreadsheet and the filter/sort tools.

It's also worth pointing out that there are signatures from Argentina, USA, Australia, Italy, Belgium and several other countries.
Posted by Unknown at 00:01