I finally got around to building myself a flag pole, a couple of the neighbours have got them so I thought that I can't be outdone. You can buy them ready to go but I figured I'd be able to make one quite easily myself. As DIY projects go this was fairly simple and not a job anyone should be afraid of trying themselves.

First thing was to buy myself a pole, here's where the first bit of hindsight comes in. Aluminium is far lighter but a bit more expensive than the mild steel that I used. The mild steel pipe cost me £24 delivered. They'd have done it cheaper if I paid cash but being a law abiding citizen I paid the full amount, that and the fact I rarely carry cash.

Once I had the tube delivered and managed to get it over the side wall whilst avoiding the power lines, over the shed and then down into the back garden I cleaned it up with some WD40 and rags. Most people will have some WD40 but a small can will set you back around £1.50

After I cleaned it up and wiped off any excess WD40 I painted it, here's where the second bit of hindsight comes in. Initially I used spray paint. This will give a better job but will cost more. I ended up paying £10 for two cans and then had to go and buy a can of metal paint for the inevitable scratches. My advice would be to spend £10-15 on a can of metal paint and a nice lossless brush in the first place.

Rather than using a faffy pulley I just opted for a simple eye bolt. Since the eye bolt is inserted near the top you can use a nut either side of the tube to secure it. I bought a cheap tap and die set from Tool Station (£7.50), I also bought some nylon rope (£5) (edit, more hindsight, don't use nylon rope) and a pack of 10 snap hooks (£2). They do free delivery on orders over £10 which is good because it means you don't have to go to their branches. My general rule of thumb is this, if you need it right now go to ScrewFix as they are quicker but if you can wait until tomorrow then Tool Station's website is fine. Obviously if you have a local hardware supplier then use them but that should go without saying. In fact you might be surprised with just how many things your local hardware supplier stocks.

The new flag pole was intended to replace the existing middle pole for the washing line, so I added an extra eye bolt for the height adjustment, that's what the second rope is on the pole. It was fairly well secured in the ground so the tube I bought was big enough to slot over it, I cut it down to around seven feet and was going to secure it with bolts to the inside pipe. The (mild steel) pipe was far too heavy to lift and it fell and smashed my knob.

All flag poles need a knob and I used the knobs from my bed, it's an old bed and we're going to replace it soon so I took the knobs off the frame. I used a hole saw a bit bigger than the pole diameter to cut out a plug for the knob to screw onto. After matching the thread up (I think it was 3/8", I said it was old!) I fixed the waste from the hole saw into my drill and then got it down to size so that it could hit it in with a rubber mallet.

Fortunately the delay caused by the first attempt meant the washers had a chance to rust, it only takes a few days. The eagle eyed amongst you will have spotted the rusty ring in the picture above. The washers I used were not (as I thought) stainless. So I swapped these over, the last thing you want is rust streaks down your pole. Look, it's difficult to write this without including double entendres so we might as well just go with it.

So now I had to switch to plan B. I broke up the foundation for the existing pole using my SDS drill until it was in small enough pieces to move by hand. The hole I was left with was around two foot deep. The next step was to find a tube that was bigger than the pole, I was able to use an old metal table leg that was being chucked away. After cutting it down to around three foot I put it in the middle of the hole.

Next step was to concrete it, I used about four bags of all in (sand and gravel) and a bag and a bit of cement. I used a soft brush to give it a speckled effect and now I am going to pretend that I intentionally wanted to give it a 'dragon scale' effect.

Before the flag pole is put in place the rope has to be put on, apparently flag people call the rope a 'halyard', so run the rope through the eyebolt all the way to the other end of the pole. Here's where the important bit comes in, I'm hoping the pole will be put in place and can be left with little maintenance. The rope will need to be checked periodically for damage but as I intend on changing the flag itself fairly frequently that shouldn't be a problem. If the rope snaps and falls out of the eye bolt it'll be a real pain to fix. So making sure it's properly tied together is a must. 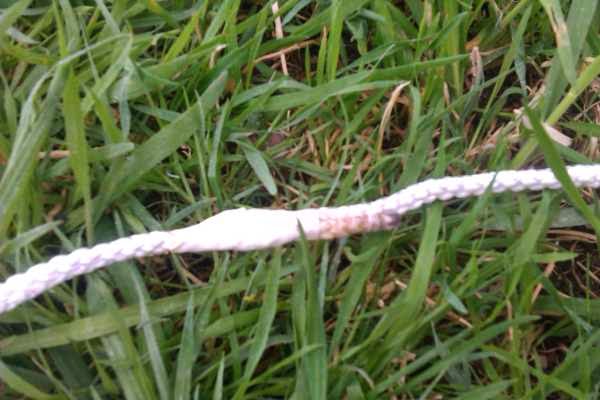 The rope is nylon so you can use a small flame to melt it to stop it fraying, the picture isn't the best quality but I overlapped the rope by a few inches and sewed it together with a needle and thread. I then wrapped it in some white insulation tape to make it look neater. This is all bigger than the eye bolt hole. When I come to attaching the snap hooks to the rope halyard I will run the joint all the way to the top so that when the flag is raised the joint will be at the bottom.

The halyard is on, the next step is to put the pole in the ground. Now realising this was a two person job I managed to persuade my other half to help out. She wanted it noted that she wasn't happy to help and it was only because I promised to buy a pirate flag that she was won over. With an aluminium pole you could probably do it on your own. So I placed some rags on the pipe in the ground to stop scratching and some breeze blocks around the hole so if the pole did slip it wouldn't go far. Whilst I was lifting the pole on one end the other person needs to push down on the other. By walking towards the hole the base end will want to lift up, that's where the other person comes in. They also need to help guide it it. Once you have it almost vertical this is where you need to really be paying attention and at no point put your hands too close to the base or the hole unless you want to lose fingers.

Once it was in it slid down nicely, the ground below was still a bit muddy so I expect it to sink a little under the weight. It was at a slight angle due to the difference in size between the sleeve and the pole. This is easy to fix with a shim and after a few weeks I can look at it again as it should have settled by then. Next up we need to attach the cleats which I bought from a local hardware store for 75p each, since I now have a cheap tap and die set I'm able to bolt the cleats in place (I needed an extra one for the height adjuster on the washing line). If you don't want to make your own thread (it's very easy) you could use a large hose clip, cable tie or even drill right the way through the pipe and use a nut the other side. Once they were attached it's time to add the snap hooks so that you can easily change the flag as an when needed.

I've used a blue rope in the picture in order to make it easier to see, attaching the snap hook is as simple as bending the rope, threading it through the hole and then looping it over. The more flexible the rope the better, the rope in the above picture is the cheap pound shop type, I wouldn't use that sort. You may wish to use the key ring type snap hook that have a swivel on the base but I can always switch to those if the hooks I used cause any problems.

The standard flag size I'll be using is five feet by three feet, the distance between the eyelets was around 84cm so I put the snap hooks this far apart and then when attaching the flag I was able to make a few tiny adjustments by threading a bit more rope in. Remember to run the join in the halyard to the top when adding the snap hooks at the bottom so that when raising it you have the join at the bottom.

The final step is to attach the flag, raise it and tie it off on the cleat. I have to say I am amazed with how good it looks and am glad I decided to make it myself.

There is a guide here (.pdf) from the UK Gov on flag poles, flags etc. I don't know if there is a Welsh Government version for our local authorities but I can't imagine there would be a huge difference. If you are unsure you should check with your council.

Edit - Sometime in August the rope snapped. This was due to me putting the flag too high up so that in high winds the rope had no give in it and it snapped. I tried a few things to rethread it like a giant needle. First I tried plastic conduit but it bent. Then I tried a few lengths of 2x1 which did actually work. I rethreaded the pole but the rope got stuck at the top. In the end I had to lift it out, rethread it whilst on the floor and put it back in. Mrs WnB was not happy with having to do this a second time!

I also bought some polyester rope this time as it's better suited for outdoor use than nylon. I am looking to buy some paracord and threading that through as a back up just in case it goes again. The main tip is to leave a bit of a gap between the top of the flag and whatever you use to thread the rope.

Edit - In actual fact it wasn't the high winds, the rope would have snapped anyway. Nylon rope rots and I was able to snap the rope with minimum effort with my bare hands. I discovered this as I kept the snapped rope for use with other things and that is when I noticed how brittle it was.

Labels: DIY, Flag, how to make a flag pole, pole