The 2016 Welsh elections were held on May 5th. The main shock saw Plaid Cymru's leader Leanne Wood winning the Rhondda seat ahead of former Education Minister Leighton Andrews. The collapse of Labour's vote (-27%) coupled with the increase in the Plaid vote (+21%) is something we're used to seeing with the SNP in Scotland, but not with Plaid Cymru in Wales.

Another surprise of the night was Kirsty Williams almost trebling her majority in Brecon and Radnorshire. Despite losing four seats, this woeful showing from the Lib Dems won't cause a leadership challenge as Kirsty is now the sole Liberal Democrat in the Senedd. (Edit - Kirsty has now resigned as leader of, umm, herself. You couldn't make this up).

UKIP performed as well as the polls had predicted. I have previously looked at the results for the EU Elections in 2014 and the General Election in 2015 so their performance shouldn't have shocked anyone as the Welsh elections includes proportional voting which gave UKIP seven regional seats.

With thanks to ITV I have compiled the following table. I have ignored the independent candidates and the whack jobs. The forty seats are listed alphabetically on the left with the colour of the party who won the seat. Their vote figure is colour coded to show where they placed. Despite it showing the Lib Dems and Greens finishing fifth and sixth there were some seats where independents hammered them both.

Closer to home Plaid failed to recapture its key target of Llanelli. It's now two Welsh elections in a row where Helen Mary Jones has failed to win by a close margin whilst ex-Plaid Cymru member and local councillor Sian Caiach picked up over a thousand votes. Despite this, the electoral pact mooted by Adam Price and Elin Jones (both of Plaid Cymru) with the Lib Dems and Greens would have seen Plaid winning the seat comfortably. Their lead over the Tories in the regional vote meant that even after dividing by five instead of four (constituency seats +1) they'd still have beaten the Tories to the fourth list seat.

The pact would also have won Cardiff West with the Lib Dems taking Cardiff Central. Cardiff West saw Cardiff Labour's number one pain in the ass running Health Minister Mark Drakeford close. In the end the 11% drop in Labour support combined with the 11% rise in Plaid support wasn't enough for Neil McEvoy to win the seat. Neil would later win a regional seat as Leanne Wood (who was ahead of Neil on the list) had already won a seat. It's currently not known if Neil will wear one of his prized football shirts when he enters the Senedd.

The Labour machine kept on going and apart from the one loss in Rhondda things haven't changed much for them. No party has ever had a majority and even after losing one AM to become either Speaker or Deputy Speaker they'll still be left with 28. Providing UKIP turn up that means they'll have to do deals with the other parties in order to allow votes to pass.

The Greens are a complete waste of space. I may take a more in depth look at them and their regional vote propaganda at a later date. Either they are clueless as to how the list vote works or they were deliberately trying to mislead voters.

UKIP performed well all over Wales. There are always people looking to try and find some form of Sais-correlation but this is the third set of results I've looked at and I really can't see any. They came second in five seats and third in a further 19.

Back in the EU Elections they polled second across the whole of Wales. If the whack job far right parties had voted UKIP they'd have come first. It'll be interesting to see what happens to UKIP after the EU referendum is done and dusted. There is clearly an alternative being sought. In Rhondda they managed to provide an alternative to the UKIP alternative, can the rest of Wales follow suit? 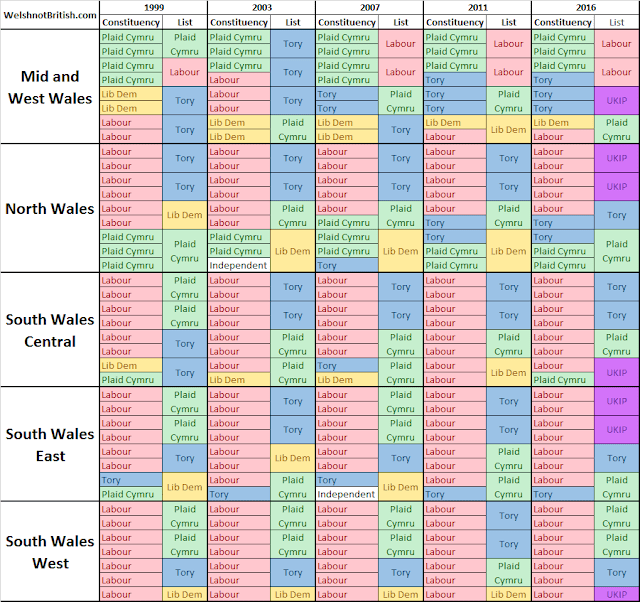 This is how the seats break down per region. With the exception of Rhondda there's no difference at all. The addition of UKIP has shaken up the regions with the Lib Dems losing out the most. South Wales West saw Plaid Cymru winning two list seats to offset the loss of a list seat in South Wales East.

There's alot of data in the tables so I've made any mistakes (I'd be amazed if I hadn't) please point it out and I'll correct them as soon as I can.
Posted by Unknown at 17:24