So by now you've all probably seen the latest anti-Welsh language news story to come out of the Daily Mail. I skimmed it, it was laughable in places. The sort of 'moribund monkey journalism' that it's readership enjoys. But this post isn't focusing on the negative story, instead let's focus on the positive reactions that came about thanks to this story.

In particular #WelshTaliban. Now for those who aren't aware of twitter (see my guide here), a # followed by text is a hashtag. It makes that word linkable and a way of easily searching tweets on a specific theme. Kind of like key words on a blog that can be used to group all posts on that topic together. Just like when the Western Mail runs one of it's anti-Welsh front pages and #WesternFail begins trending. This time #WelshTaliban started trending, the natives had taken the term used by the Mail as an insult and used it for mirth and merryment. It proved once again that no matter how much money these rags spend trying to insult us and make fun of us they are just wasting their time.

The reason is simple, no one can take the piss out of Welsh people better than Welsh people. Especially not  gutter journos with more than a hint of Little Ingurlunder about them. They don't understand our country, our language, our quaint and/or bizarre habits. And this is perhaps why they try to belittle us, because this failure to even try to understand is why they fear us.

For the most part, south Wales is sunny. However, our rugby team is Shiite. #WelshTaliban
— CarwynTywyn (@CarwynTywyn) November 29, 2012

But even after all the dust settles on this recent attack the sad truth is this, no matter how hard the Daily Mail tries to attack Cymru and Cymraeg, it will still never be the most anti-Wales, anti-Welsh paper out there. The Daily Mail is the newspaper equivalent of the Tories, irrelevant in Wales for we have an even bigger enemy, one that tries to pass itself off as our own paper. In other words, as Kanye West might say... 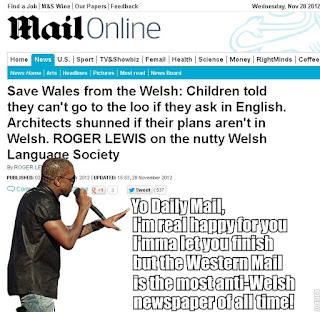