The hypocrisy of Ann Clwyd

Ann Clwyd hits the headlines today as she blames the Tories for killing her husband. Alright, maybe I have used some artistic license there but she did say that he died "like a battery hen". And after contracting hospital induced pnuemonia she also cites the poor condition he was left in. 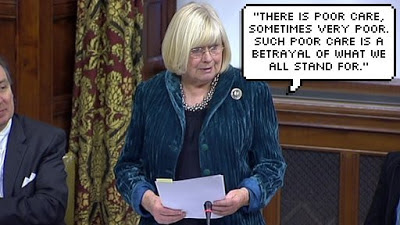 That's right Ann, it is a betrayal of what we all stand for. No politician would ever say that they support treating patients like battery hens. They do of course, but that's after we voted for them so it doesn't count. 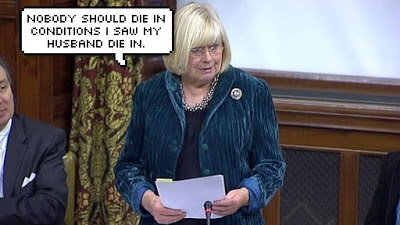 Once again, we're on the same page. No one should die in those conditions. Hospitals are there to try and make us better. 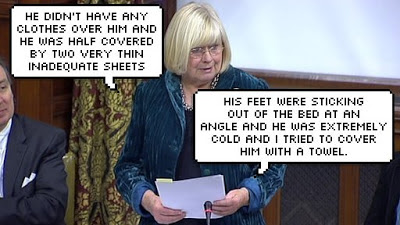 Like many people I have had family go into hospital and not come home after contracting a hosptal bug. But unlike Ann I am not a member of any political party let alone the very same political party that has decimated hospitals all over Wales. At this very moment in time there are five petitions on the Senedd website directly related to the handling of our NHS by Labour. And if you check the petitions that are no longer open then there are even more directly related to the handling of our NHS by Labour.
Now you may think this article is as cold and harsh as a Welsh hospital. But if you listen to the interview on the BBC link she is clearly trying to blame this on the Tories which is far colder and far harsher. She even quotes the "Health Secretary" and the "King's Fund" report. Perhaps Ann Clwyd doesn't realise that the University Hospital of Wales is in Wales, that health is devolved, that her party has run Wales for 15 years (either from Cardiff or London). Or maybe she does realise all of those things and is just using this as a way of having a dig at the Tories. Perhaps Ann should look a little closer to home to see who is to blame for these failures right across Wales.
Posted by Unknown at 19:08