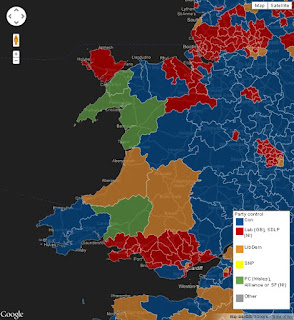 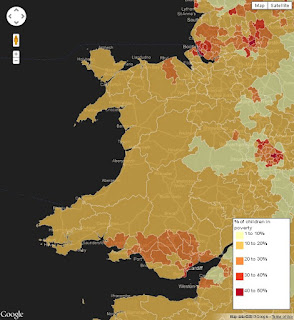 The first picture shows the constituencies of Wales and their parties. The second shows the levels of child poverty in these constituences. Have you noticed the very worrying trend? In case you haven't I have animated the two pictures together.
It's worth noting that every single constituency in Wales has at least 10% child poverty. But only constituencies under the control of the Labour party have child poverty in excess of 20%. And if you look way down in Cardiff Bay there is a tiny patch of red signifying at least 30% of those children are in poverty.

I've enlarged this area so you can see it clearer. This Labour stronghold used to belong to Alun Michael. He quit being an MP in 2012 and decided to become a Police Commissioner instead. Now this area is run by Steven Doughty. So he can proudly say that he is the MP for the worst area of child poverty in the whole of Wales. But the data was compiled last year, so Alun Michael is well within his rights to claim all the credit for this achievement. He was MP for this poverty stricken area for 25 years after all.
And considering the level of cuts being imposed by the Labour run Cardiff Council, it's hard to imagine these kids getting a break anytime soon.