Brace yourselves, a hung parliament is coming. This means that the London parties are going to resort to lies and smears in order to try and win votes because they think we're stupid and they know the media doesn't want to help educate us.

The Welsh branch of London Labour tweeted this today from their @WelshLabPress account.

Let's have a quick run through so we can then take it to task. Remember, all we're interested in is the tweet.

You know something is important when it starts off saying Breaking News: I'm just shocked they didn't put in ALL CAPS which as we all know is cruise control for cool. Then it goes on to tell us Plaid Cymru MPs would vote down a minority Labour government.

Well isn't this amazing, at the last parliament Plaid had three MPs, their most came in 1992 they managed to get four MPs elected by doing a deal with the greens in Ceredigion. Even the most optimistic Plaid supporters would concede that the best they could possibly hope for is six. Are Labour really that rattled that they are now in panic mode over Plaid winning six or less seats ,even if two of the three extra would be at Labour's expense?

Then we get to the best bit, allowing Tories in through the backdoor. The rules for a hung parliament are pretty clear and we saw them in action at the last election. If no party wins a majority then the Prime Minister gets first crack at forming a government. If he cannot win a majority vote of supply and confidence then he will resign and it'll pass to Miliband who will have a shot. That means if Labour get to have a crack at forming a government then the Tories will already have failed.

The minority Labour government is also a key phrase as this means that Labour will already have told the left wing parties in Wales, Scotland and England to piss off, either before negotiations took place or because they didn't want to meet the demands made by the other parties. So why would they be shocked that these same parties then decided not to vote for a minority Labour government? 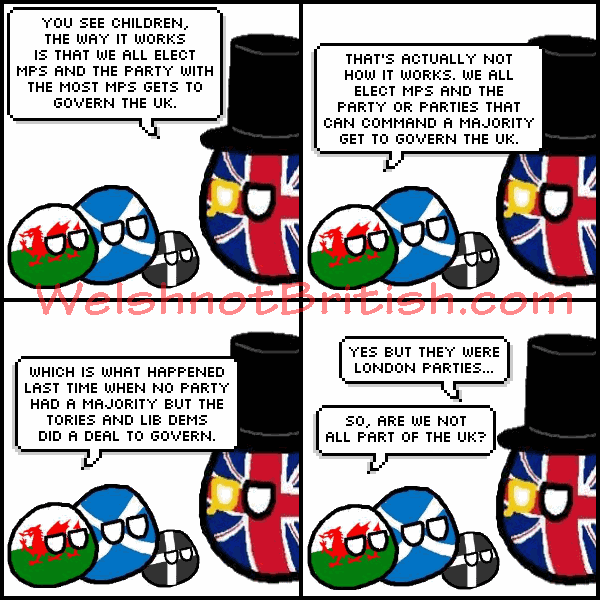 If Labour were to fail when they tried forming a minority government then the only course of action would be to have another general election. So why are Labour's Welsh branch so scared? We know they are finished in Scotland and now despite polling well in Wales are resorting to lies and smears.

It's either because they know the end is nigh or simply because it's just what they do. Since the Scottish branch of London Labour are also peddling the same lie today then I'm going for the latter.
Posted by Unknown at 19:49