Today the English Broadcasting Corporation were over joyed to be able to announce that filthy nationalism in Wales is now down to the 'record low' of 'just' 3%. The state broadcaster of the British State would love this to be true for hundreds of millions of license fee pounds reasons but anyone who takes a cursory look at their report will see it for what it is.

The EBC haven't linked to any data tables or other information but that's fine because they tell us all we need to know with the answers they give. If you want to conduct a poll on how many people in Wales support independence then all you do is conduct a poll and ask them, this isn't what the EBC have done.

They've asked some convoluted question about the Welsh Government, devolution, more powers etc and then given the people asked seven possible choices. In the recent referendum in Scotland and in the referendums we have had in Wales over the past few decades there has been two choices to pick from, yes or no. Not seven, no one turns up at the polling station and puts a cross in the 'I don't know' box because there isn't one.

So here's the graphic from the EBC website explaining it all.

Just by looking at the answers you can see it wasn't a straight yes or no answer. There are seven possible options. If this was a genuine referendum question and we lived in a world where referendum questions had seven possible answers then only an absolute moron would choose the Welsh independence answer because clearly most people, by far, would opt for the more powers answer simply because it's a quick win and keeps us moving forward.

But let's say that people were told before hand that if you vote for independence and it doesn't win then don't worry your vote will count towards the more powers vote then choosing independence wouldn't be a stupid choice because it would count . And since people who do support independence are therefore stating for a fact they want the Welsh Government to have more powers that means even before discounting the don't know or none of these choices that gives more powers 52%, which is a majority.

Without the numbers we can only estimate the figures but since they've told us they polled 1006 people and gave us the percentages we can do some fag packet maths, see table below. First obvious thing is that simply using the percentages only gives us just under 986 people (pink). That means by the power of rounding we've lost 20 people. Anyway, let's press on. Taking out the don't know (umm) and none of these (What?) leaves us with just over 925 people (blue). Feeding the numbers back in gives more powers over 53% (orange) of the vote and we didn't even have to add in those crazy people who support filthy Welsh nationalism as opposed to the wholesome, clean and family friendly British Nationalism. But if we did it would come to 56.52% or 57% if, like the EBC, you are a fan of rounding. 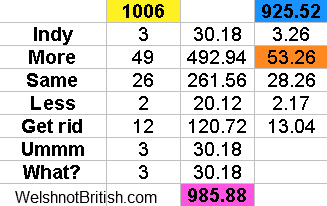 Naturally if the EBC published these numbers along with its bullshit reports we'd be able to give a more accurate picture.

To summarise the simple point is this, if there was a referendum tomorrow asking what we want the Welsh Government to be in control of and it was a straight shoot out between the seven choices then I and many more people who support Welsh independence would opt for the more powers option unless as I said earlier the independence option would also count towards more powers.

Of course if the BBC really do want to find out how many people support Welsh independence they could just ask them and give them a straight yes or no answer. Instead they produce reports like this because they think we are stupid.