Unless you have been living under a rock recently then you will have seen the shitstorm that Lidl have caused over their language policy in their UK stores. It all started up in Scotland when Polish workers at a store in Kircaldy were banned from speaking Polish to each other or they would be sacked.

This led to the people at the EBC's Welsh language news site Cymru Fyw seeking clarification from Lidl UK as to what their language policy was in Welsh stores. Regular readers will be aware that the EBC likes to bury stories where Welsh is being opressed but provide wall to wall coverage where Welsh can be portrayed negatively. This time, however, the EBC decided to run this story on their English language Welsh news site. The only possible explanation for this is because it was them who broke it in the first place.

The statement from Lidl UK reads as follows.

"It is Lidl UK company policy that staff speak in English to customers, irrespective of their native language," the company told the BBC Welsh-language website Cymru Fyw.

"This is for the benefit of all our customers as well as our staff to ensure a comfortable environment where all feel included.

"However, it goes without saying that our staff are able to assist a customer by conversing in their native tongue, if the customer is unable to speak any English." - Source

Naturally the outrage was immediate with #lidlfail trending on twitter and the official hashtags #lidlsurprises and #lidlers becoming easy targets.

Eventually Lidl UK decided to issue another official statement, this time via their facebook page. 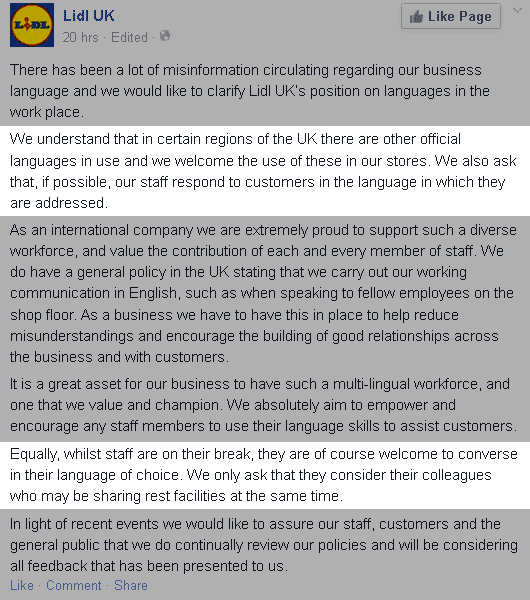 I have highlighted two paragraphs that contradict what has happened in the last fews days. We'll skip past the derogatory 'regional' remark and look at the bit where they say...

"We also ask that, if possible, our staff respond to customers in the language in which they are addressed."

Which doesn't fit with the previous statement of...

"However, it goes without saying that our staff are able to assist a customer by conversing in their native tongue, if the customer is unable to speak any English."

So which is it Lidl UK? Are staff able to speak to customers in another language or are they only allowed to do it if the customer cannot speak English?

The second part I have highlighted contradicts what has happened in Kircaldy when the Polish workers were ordered not to speak Polish whilst on their breaks or they would be sacked. They say they should consider their colleagues which basically means that this 'consideration' for colleagues is a one way street.

Lidl UK's twitter account then embarked on a mass spree of copy and pasting as they tried to reply to people who had questioned its bigotted language policy.

Edit - Lidl UK has issued yet another official statement, the third of this whole saga. This one was again made via their facebook page.

Once again this leaves the whole situation regarding what should happen if two non English speakers are talking on break and an English only speaker enters the room up for debate. If we are to assume that this statement supercedes the previous statement which superceded the one before then it means that there is no longer the expectation to consider the English only speakers. I think we can all agree this saga has been badly handled from the start and if this is the last statement made I would be very surprised.

Lidl UK have pissed off a lot of people, not just with their initial bigotted racism but also with their handling of the situation. They haven't apologised and are instead insisting that everyone else is wrong and they are correct.

Edit - Lidl have issued another official statement, this time from the big boss of Lidl UK addressed to the Welsh Language Commissioner Meri Huws. The .pdf of the letter can be found on this link. It is hosted on Lleol.net.


I can't help but wonder why they didn't just say this in the first place.