The Principality Building Society (PBS) has bought the naming rights to Wales' national rugby stadium. The word principality is an ugly word here in Wales with all sorts of negative colonial connotations.

In order to begin properly we need a quick history refresher, so let's take a trip back to 1282 when the English were really starting to tighten the noose around Wales.

Llywelyn ap Gruffudd was murdered near Cilmeri by the English in December 1282, his brother Dafydd took over the family business but it was short lived as he was hanged drawn and quartered in Shrewsbury in 1283. For me the saddest part of the tale is what happened next. The children of our last rulers were imprisoned. As just one example, Gwenllian ferch Llywelyn (Llywelyn's daughter) was imprisoned in a priory in England where she was raised by nuns until she died in her fifties, unable to even pronounce or spell her name.

With the heirs to Wales out of the way the English had a much easier job of taking over. The Statute of Rhuddlan was passed in 1284 which declared the principality of North Wales to be English territory. In 1301 the English prince who would become Edward II was declared Prince of Wales, a title stolen from the Welsh children who had been kidnapped and imprisoned. A few decades later the English prince who would become Edward III adopted three ostrich feathers on his badge.

To this day the three feathers is the property of the heir to the English throne (even before he adopts the stolen title of 'Prince of Wales') complete with the German motto 'Ich Dien' (I serve - more like 'I serf' amirite?). The WRU has permission to use a stylised version of Charlie's feathers but have replaced the German with the letters WRU.

So now we're pretty back to modern day with Charlie as the heir to the English throne and the owner of the feathers. His son Wilhelm is the WRU's vice royal patron with Betty being the royal patron. From all of this I think it is safe to say that the Welsh Rugby Union is the epitome of sycophancy towards the English royal family.

The Group Chief Exec of the PBS is a mate of Charlie's and was an ambassador for him just before going to work at the PBS who just so happen to buying the naming rights to the home of one of Wales' most iconic institutions.

One of the things the PBS will be hoping for out of all this is the brand recognition, but what usually happens with stadium naming rights is that the fans hate the new name, no matter what it is. The fans continue to use the name they have used for years and the only people who do use the new name are those who are contractually obliged to, like the media.

With this in mind I conducted an unscientific poll via twitter.

Poll - What will you call the Welsh rugby stadium from now on?
— Welsh not British (@welshnotbritish) December 16, 2015

Whilst reading the press release for the new logo I was puzzled by the addition of the following sentence.

"The logo is bilingual across all its trademarks, featuring the word ‘Stadium’ and its Welsh translation ‘Stadiwm’, reflecting both organisations’ commitment to the Welsh language."


You really couldn't make this up but in case you don't believe me then go read it yourself. Here's the direct link and here's the direct link to the press release on the Welsh language version of the website. Don't bother clicking as it's exactly the same  as the English version except that at the bottom it says Cyhoeddwyd instead of published, but that's automated so it would say that.

Meanwhile, over at the WRU website it would appear their commitment to the Welsh language is lacking too. At the time of writing this the news page in English shows seven news stories from earlier in the day. 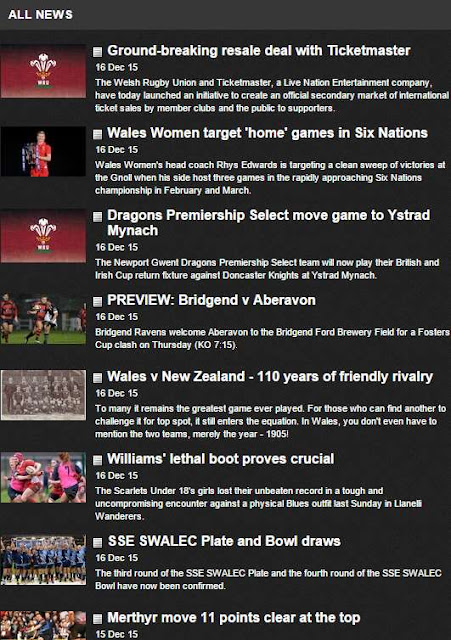 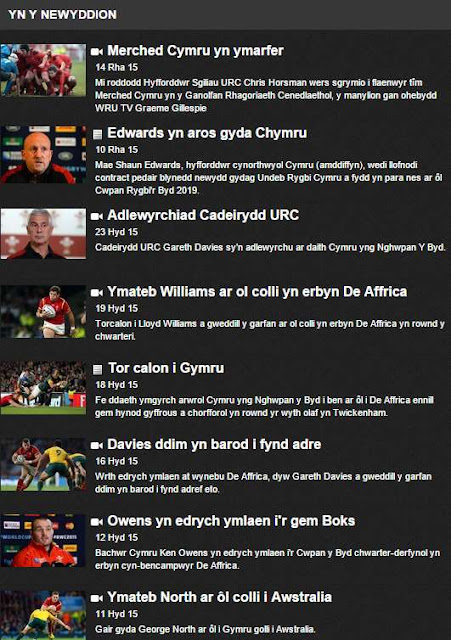 To summarise, the Welsh Rugby Union wear the badge of an English prince and will play in the Principality Stadium. Their patrons are an English queen and an English prince. The guy in charge of the PBS is mates with the guy who owns the badge that the WRU love so much.

They bang on about how committed they are to Welsh whilst simultaneously not giving a toss. And to put the 'Ich Dien' on the top we've given the WRU millions of pounds (via Sports Wales) in 'grant aid' for this pleasure (I emailed them - £2,040,198.00 from 2005 until the end of 2013).

Have I missed anything out?
Posted by Unknown at 18:10