A simple image search for Wrexham Lager adverts, cans and beer mats will show a confused history of the Wrexham Lager company. They can all be summed up with the following poster, shared to my facebook page by a reader.

The above photo was taken in a bar in the Catalan city of Salou. Wrexham Lager was founded in 1882 (or maybe even 1881). The same picture is up in a pub in Llangollen. Six years earlier in Wrexham the world's third oldest national football association was founded so it's strange how Wales as a nation can play international football and yet the then owners of Wrexham Lager decided we were only worthy of being a region of England, as that is what the above is stating with the England all capitalised.

One year before Wrexham Lager was founded the Welsh Rugby Union was founded in Neath. If there had been a Neath Lager it might have advertised itself as Neath, South Wales, ENGLAND. Or perhaps not.

Here's a picture taken from this BBC article depicting Wrexham Lager (shown by its then ace of clubs symbol) being the choice of tiger hunters whilst their Indian slaves bring them refreshments.

At this point I'll mention that Wrexham Lager has been relaunched and is now embracing its Welsh identity and its place in Wrexham history. So this is not intended to be a dig at the current owners although it would be nice if their website would acknowledge the confused history of the brands former owners.

A simple image search shows that they regularly pretended that they were in England. The following is taken from the Brewers History Society website.

There's plenty of examples of the England being dropped and the 'British' tag being adopted. It was the oldest lager brewed in Britain. It was originally brewed by two Germans but Fosters was created by two Americans and no one would consider Fosters anything other than an Australian brand so it's not really worth mentioning other than so that I'm not accused of ignoring it.


And let's not forget that 'British' is best, that is why those slaves were serving their 'British' masters with 'British' beer. Days of empire, the map was all pink, imperialism, colonial rule, rule-Britannia, God bless the King and all that nonsonse. 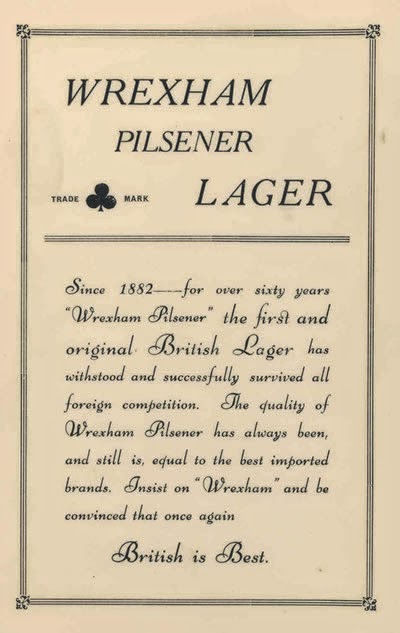 Thankfully the original ashamed-to-be-Welsh Wrexham Lager ceased to be in 2000 and has since been taken over by people who are not ashamed to use words like Wales, Welsh or even words that are not in English at all. The current owners actually use Cymraeg on their branding. 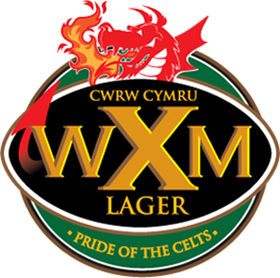 I'm a bit unsure of the 'Pride of the Celts' but other than that there is a dragon and 'Cwrw Cymru' translates as Welsh Beer. It's taken over a century but at least now an iconic Welsh brand is using Wales as its branding and not trying to trade off another country or an empire in order to boost sales.