Labour's abstention on the Welfare bill keeps offering nuggets of hypocrisy all over the place, you needn't look very hard to find them and today we'll take a look at Llanelli's Labour MP Nia Griffith.

Nia Griffith voted for the Tories £30 billion worth of austerity cuts in January and then had the audacity in March to write on her blog that "Llanelli simply couldn't afford another five years of Tory Government". Unfortunately the people of Llanelli are rather fond of austerity so they voted for her once again, just as they have voted Labour in each general election for the past 93 years.

Nia was one of the spineless Labour MPs that failed to vote against the Tory Welfare Reform and Work Bill. Nia's blog is currently down for maintenance, luckily I had already taken snapshots in case I needed them for future use.

This means we have to rely on Llanelli's local newspaper to relay Nia's press releases. The Llanelli Star tweeted the afternoon after her abstention that they had been trying to contact her since 8am with no luck.

I can only imagine that Nia hadn't received her script by then so was unable to provide an answer as to why she had blindly followed the orders of London Labour like the rest of the spineless hive of scumbags.

Eventually Nia broke cover and spoke with the newspaper. It's a brief piece, curiously the headline mentions that she will vote against it next time. We'll skirt around that for now as it will come in handy should Nia decide not to vote against it.

It then mentions that 48 Labour MPs voted against and that Nia was one of those who went with the party line. This shouldn't be of any surprise to anyone as Nia was one of just four MPs from Welsh constituencies (all Labour) who didn't rebel against their party once during the last parliament. In over 930 votes Nia voted whichever way she was told to vote. So when Nia tells us that she will vote against something we need to take it with a pinch of salt because the only reason she would have to vote against something is because she is doing as she is told.

The script press release that is then printed is basically identical to what Cardiff West's Kevin Brennan or Aberavon's Stephen Kinnock have said. They liked some of the cuts so let it pass but they might vote against it further down the road, or they might not. It really does depend on what they get told to do.

Since Nia's website is down at the moment I have had to browse her twitter feed for other examples of hypocrisy on this issue. And once again it didn't take long to find some, partly because they were so obvious and partly because Nia doesn't tweet very much. 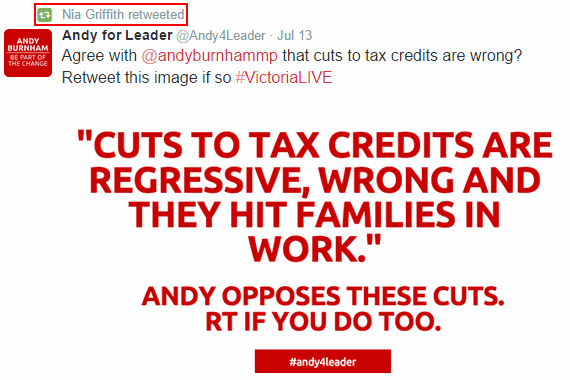 First up we have a tweet from Andy that Nia has retweeted. It is from July 13th and it bangs on about how unfair cuts to tax credits are. It then states, Andy opposes these cuts. RT if you do too. 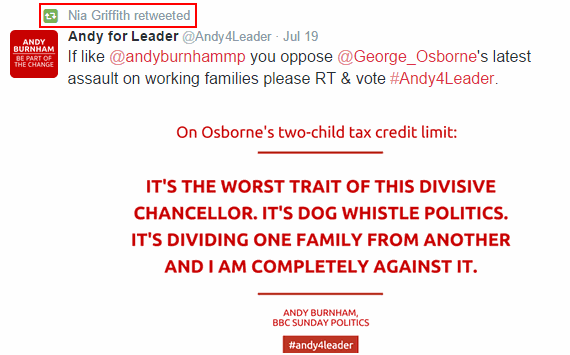 This one is from July 19th, it is also from Andy and it's banging on about the Tories wanting to implement a two-child tax credit limit. Once against Andy states that he is completely against it. And by against it he actually means he isn't going to vote against it he will abstain instead. Nia also retweeted this one. I think it is safe to assume a few things here. Firstly that Nia wants Andy to be the next leader of the Red Tories. Secondly that Nia also opposes the two-child limit. Thirdly, by opposing it she of course doesn't oppose it, or at least she thought she did until she was told that she didn't.

#Llanelli's Labour MP tweeted her opposition to cuts but then abstained when it was vote time http://t.co/LPTkXxmx3z pic.twitter.com/6T1KFF2aDH
— Welsh not British (@welshnotbritish) July 27, 2015

Another one of the spineless Labour MPs. This is Llanelli's Nia Griffiths who actually liked some of the cuts but...
Posted by Welsh not British on Monday, 27 July 2015